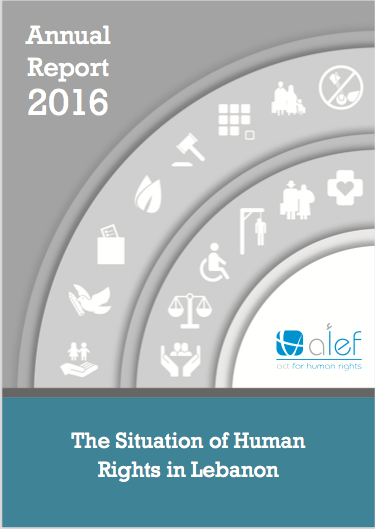 As in previous years, the Lebanese government has taken some positive steps towards promoting human rights in 2016, but has missed several opportunities to uphold the country’s international obligations, and failed to address major protection concerns of the general population. The Lebanese criminal justice system continues to overlook many of the international standards set by the Universal Declaration of Human Rights (UDHR) and the International Covenant on Civil and Political Rights (ICCPR). This resulted in continued practices of arbitrary detention in 2016, which is typically attributed to largely unfounded ‘security concerns’. Prison conditions are also deteriorating, with the prison population remaining at nearly twice prisons’ listed capacities in 2016. The broad jurisdiction of the military court remains a major obstacle to the pursuit of justice in Lebanon. This court is not completely independent or impartial, which has led to the arbitrary detention and lack of respect for the fair trial rights of civilians. The decentralization of justice is exacerbated by religious personal status courts which, with the absence of a civil code regulating personal status matters, leave gaps and create additional challenges to addressing personal status issues. This also perpetuates inequality towards those whose religion is not of cially recognized.

Lebanon had witnessed the end of a two and a half year presidential vacuum with the election of President Michel Aoun in October 2016. This begins the process towards normalizing the Executive body amid an overdue election of the state’s Legislative body (since 2013), a delay which challenged the legitimacy of the Lebanese State. The municipal elections also took place in May 2016, marking the rst time in 7 years where citizens actively exercised their civil rights.

Lebanese authorities have continued to adhere to approaches which disregard refugee protection, and push for a quick return to Syria irrespective of the safety and security conditions in the refugees’ places of origin, consistently stating that refugees are a “threat to national security”. Even if the refugee crisis poses signi cant security and economic challenges to Lebanon, the enforcement of ad-hoc security-centred measures which encourage impunity and overlook the protection needs of refugees will only add to the security threat as it widens the gap between the refugees and host communities.

Only 56% of Lebanon’s total appeal for funding requirements as part of the Regional Refugee and Resilience Plan was met in 2016, meaning that the 45% gap (approximately $850.46 million) of refugee-related costs was left to be tackled primarily by the Lebanese government as indirect social and infrastructure costs. Financial support for Lebanon has proved to be critical in preventing the deterioration of the current situation. Through the Ministry of Education and Higher Education’s Reaching All Children with Education (RACE) strategy, for example, the refugee out- of-school rate dropped from an estimated 78% in 2014 to a 49% at the start of 2016.

Municipal authorities under the guise of safety and security repeatedly antagonized refugees, leading to some local governments enforcing restrictive measures on their freedom of movement. The restrictions to international aid for national and localized efforts, coupled with the absence of sustainable solutions and solidarity among nations in terms of demographic burden-sharing, has increased in the trend of violations against refugees in violation of human rights and refugee rights principles.

Migrant workers in Lebanon face widespread violations and poor protection identi ed by the awed and inappropriate sponsorship system that transforms the status of migrant workers to victims of traf cking. In addition to this, the immigration and security challenges in the region not only threaten the safety of the population, but also raise concerns about the capacity of the state to adequately protect and uphold good human rights practices in this situation.

At least 109 death penalties were issued by the Judicial Council in 2016, a signi cant increase from 2015’s 32. Anecdotal information indicated that the death penalty enjoys widespread support among the Lebanese public, and its abolishment has only recently gained minimal governmental backing. After a 15 year delay, the Lebanese government submitted its report to the Committee Against Torture in March 2016. The report did not contain any signi cant mentions of developments and state efforts to effectively prohibit the use of torture in Lebanon. One possible advancement towards increased commitment to international treaties, including the United Nations Convention Against Torture, was the October 2016 passing of legislation ordering the creation of the National Preventive Mechanism (NPM) as part of the National Human Rights Institute (NHRI). This independent human rights body will receive and process complaints and allow legislators to prevent the occurrence of torture violations.

Challenges to child protection proved to be challenging to address; the age of consent for example is set by religious tribunals, allowing for juveniles who are victims of sexual abuse to claim responsibility for their actions, stripping them from their right to access protection and legal remedy. The implementation of policies in place to combat child abuse and sexual assault do not have the reach that they would need to be thoroughly protective.

Access to health comprises issues that go beyond the lack of healthcare for impoverished. The continued fragmentation of healthcare delivery has led to a wealth-based polarization of access in the private health sector, exacerbated by dependency on underfunded and often inef cient health actors in the public health sector. Both of these are characterized by gaps in weak accountability, and corruption. The increased population growth resulting from the protracted Syrian and Palestinian refugee crises have also revealed structural gaps within the local healthcare system, whose reform strongly relies on political decision making. The environment has been a highly discussed topic when considering waste disposal strategies. An Air Quality Index study showed that carcinogens increased by 2,300% after trash burning days. This sparked policy discussions in 2016 regarding temporary solutions to the larger issue of overcapacity, which is caused by citizens and refugees alike.