The Situation of Human Rights in Lebanon -2017 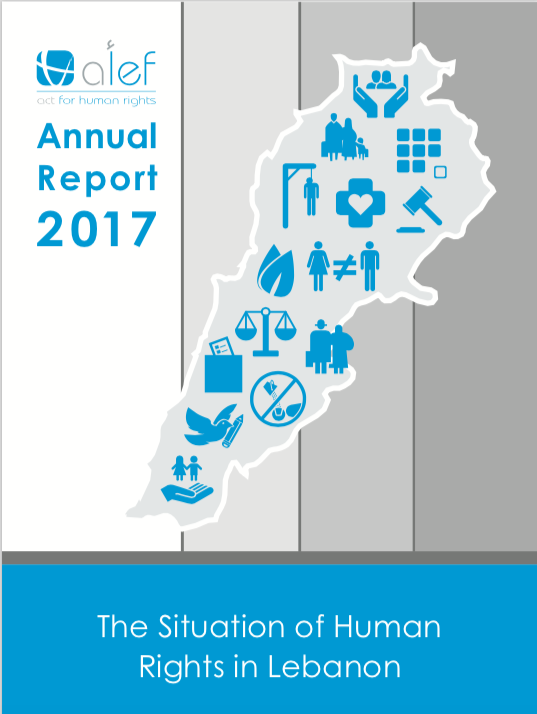 n 2017, Lebanese Parliament amended and passed several laws that improve human rights in Lebanon and reaffirm the realization of several efforts by Lebanese civil society in areas concerning elections, transparency, women’s rights, and torture prevention. Recent legislative reforms include changing the electoral law and the prohibition of marital rape, as well as the criminalization of torture, and additional policy decisions pertaining to the Syrian refugee crisis.

However, the persisting lack in political will to create meaningful change and the continuous implementation of policies and practices which contradict legislation, prevents these laws from being implemented justly. The pretext of a “challenging security situation,” as a justification to deprive individuals of liberty and their right to fair trial violates internationally protected rights and guarantees.

Detainees are still held in overcrowded and poorly lit police stations with a lack of basic sanitation and alimentary needs. By June 2017, 6,246 individuals were in prisons designed to hold a total of 3,500 prisoners. Fifty-seven per cent of these detainees are still awaiting trial. Additionally, in 2017, Lebanese authorities detained and charged several individuals for social media posts that were critical of public officials; threatening the right to free speech.

The Lebanese court system is also subject to various human rights violations. The lack of an appeal system within the Judicial Council is a blatant breach of international standards, and the Military Court’s jurisdiction over civilian cases continues to violate guarantees for the independence of the judiciary and the protection of the basic rights of detainees. Both ordinary and exceptional courts have handed out death sentences. Politicians and citizens recently advocated for the reinstatement of the death penalty. This decision would be a serious human rights setback for Lebanon.

For many years, parliamentarians have been working alongside civil society to draft, discuss, and pass a law criminalizing torture. This law was finally passed in September 2017. Although this marks a step in the right direction towards combating torture practices, the provisions of the law remain incomplete. Torture remains a common practice, especially during police interrogations. Due to social, cultural and political exclusion, migrants, refugees, trafficked persons, and members of the LGBTQ+ community are at higher risk of being tortured. Individuals discriminated against due to ethnic and religious identity are also particularly vulnerable to cruel, inhuman and degrading treatment. The persistent use of torture against vulnerable

communities, despite the creation of laws to prevent it, is deeply concerning. Minority groups are a litmus test for the rest of society; if the government does not care to protect its vulnerable communities then society-at-large is at risk of being harmed arbitrarily when the government deems it necessary.

The Lebanese Parliament was also successful in abolishing a law allowing rapists to escape charges if they married their victims. Still, the state has failed to address serious gender-based violence. The state also continues to allow high rates of child labor, particularly in the agricultural sector where child labor is still allowed after a child turns ten. This has serious consequences for Syrian children. Ninety-three percent of refugee families resort to child labor since adults are restricted from accessing the labor market.

Several policies adopted by the Lebanese government helped facilitate refugees’ access to legal and civil documentation. However, their rights remain at risk. Although the number of registered Syrian refugees dropped in 2017 to 997,905 refugees face several obstacles to the right to physical safety. Municipalities forcibly evict refugees, and continue to enforce curfews targeted at Syrian nationals. Without official legal residency permits, refugees are at high risk of being deported back to Syria where they could face arbitrary detention, torture and other forms of persecution. In 2017, the Lebanese government agreed to abolish the required yearly $200 visa-renewal fee that refugees had pay to remain in Lebanon legally. The fee was problematic since 76% of the refugees living in Lebanon live below the national poverty line and more than half of Syrian refugees in Lebanon live in extreme poverty. Unfortunately, the new policy still excludes a large number of refugees. Due to inconsistencies in the policy’s implementation, a majority of Syrian nationals were unable to obtain visa renewals and legal residency. As of December 2017, only 36% of the estimated USD 2.035 billion that was required to provide adequate support to Syrian refugees in Lebanon was funded. Problems in funding pose additional barriers to refugees’ access to education in Lebanon.

Due to several protection gaps within the Lebanese sponsorship system, migrant workers remain at risk of exploitation by their sponsors. Abuses resulting from a legislative, imbalanced power dynamic between employer and worker range from: denial of time-off, non-payment of wages, restriction of movement, confiscation of passport and identification documents, and other forms of ill-treatment due to common misconceptions and an absence of an adequate protection framework.

Unrecognized religious groups also struggle to be treated equally in Lebanon. They cannot run for office, apply for government positions, or put their religion on their passports despite such a requirement for all Lebanese citizens.

Elections provide ample opportunity for minorities, and Lebanese citizens in general, to hold officials accountable. The new application of a proportional system that allows for better representation is an improvement. However, the lack of other major reforms, such as the formation of an independent body to manage and supervise campaigns and an efficient mechanism to monitor campaign funding are cause for concern.

The solutions for the ongoing waste management crisis have focused primarily on finding alternative dump sites instead of concentrating on adopting more sustainable environment policies that are mindful of the impact of waste management on the health of the general population.

The right to health is further violated by the costly Lebanese health care system. Almost half of the Lebanese population cannot access affordable medical coverage. The public health sector should act as a safety net for those who do not have access to the private sector. In Lebanon, it is severely underfunded, underequipped, underqualified and unable to provide basic affordable health care.